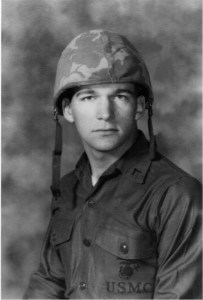 Fund Created to Erect a Monument located at Eastern Regional High School in Voorhees, NJ for a Marine killed in action during Vietnam War in 1968

Voorhees, NJ, January 22, 2018–The Joseph E. Lauer Memorial Fund has announced its’ intention to conduct a fund drive for the purpose of erecting a suitable memorial for Joseph E.  (“Jay”) Lauer a US Marine who was killed in action during the Vietnam War.  Lauer was a resident of Gibbsboro, NJ and a member of the Class of 1967, the first graduating class of Eastern Regional High School, which opened in 1965.  After graduating from Eastern, he enlisted in the US Marine Corps and volunteered to go to Vietnam.  Lauer’s tour started on May 8, 1968 and only 23 days after arriving in Vietnam, PFC Lauer was killed in Quang Tri, South Vietnam, from the result of Mortar Fire.  As of this date, Lauer has been the only Eastern Regional High School graduate killed in combat in the school’s 50 plus year history.

The proposed memorial will be located at the main entrance to the school at the flagpole. An area approximately 26 feet by 40 feet will be transformed with pavers and landscaping.  A granite monument will be placed in honor of Lauer’s service to his country.  It is estimated that the cost to complete the project will be in the $20,000 range and funded by donations.

The fund’s founder John Masso also a member of the Class of 1967 recalled, “On June 14, 1968, the senior class gathered at Eastern Regional High School for the second graduation in the school’s brief history.  Proud parents, friends and family were anxiously waiting for that special moment as their loved ones received their diplomas.  A short distance away, on Winding Way in Gibbsboro, was a scene so surreal that those of us in attendance found impossible to fathom.  The School’s Class of 1967, the first graduating class, gathered to pay their respects to Jay Lauer. Our friend, classmate and football teammate Jay had been killed in combat in Vietnam, almost a year to the day of his high school graduation.  Despite being exempt from the draft, Jay joined the Marines and shortly thereafter volunteered to go to Vietnam.  A year later he came home wrapped in the flag of his country he chose to serve.  Walking past his glass-encased coffin seeing him in his Marine Corps dress blues for the last time was something we could not process.  Not then, maybe not even now. That feeling is what inspired us to erect a memorial in his honor at Eastern. Since that night almost 50 years ago, we’ve all went on to live our lives, and now I feel it’s time to reach out and create this place of honor at Eastern High.  Lastly, a site such as this will give past and future generations of students and citizens a place to go and reflect on the tremendous sacrifice our armed forces give, hopefully serving as an inspiration to others.”

If you would like more information about this topic, please contact John Masso or Jack Gangluff 856-296-5552 or email at [email protected]